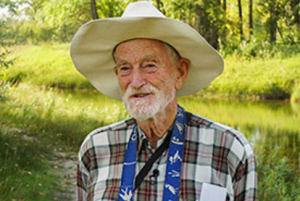 It was with great sadness that Nature Calgary learned of the passing of Gus Yaki on Monday, August 10th. We extend our sincere condolences to Aileen and family.

Countless Calgarians benefitted greatly from his boundless knowledge, enthusiasm and energy in promoting and leading natural history outings and educational opportunities to learn, appreciate and ultimately to protect our natural heritage. Although, we will no longer have the pleasure of sharing a nature walk with Gus, his spirit will be with us. It will be sensed in the bird songs of spring and the summer blossoms that brighten our world.

Gus Yaki, was born at Sandwith, Saskatchewan (near North Battleford), received MAID (Medical Assistance in Dying) to die peacefully in Calgary at the age of 87. He was predeceased by his first wife Rae Jeannine Yaki (Venner), his sisters Mary Anne Grant and Dorothy Pauline Gasper, his grandson Philip, and great grandson Lincoln. He is survived by his dear wife Aileen Pelzer, his brother Stanley John Yaki, his sister Margaret Rose Weger, as well as his children Donald, James (Jim), David, Robyn Fortier, Barbara (Barb), Patricia (Tricia) Bartone, and Jonathon Neville, as well as their spouses, descendants and extended families.

Gus became interested in nature as a child walking back and forth to school and eventually made a living as a nature tour operator. After retiring, he continued volunteering his time as a naturalist. In 2005 he started birding classes with the Friends of Fish Creek which attract hundreds of participants. In 2017, at the age of 84, he organized and led a hike across southern Alberta to celebrate Canada 150 in support of bird study and habitat conservation. In 2019, he was awarded the Sovereign’s Medal for Volunteers by the Governor General of Canada, and was recognized as one of Calgary’s “Top 7 over 70”.

Donations in lieu of gifts may be made to Nature Conservancy of Canada, 245 Eglinton Ave East, Suite 410, Toronto, Ontario M4P 3J1, and/or to Alberta Wilderness Association, 455 – 12 St NW, Calgary, Alberta T2N 1Y9. (Receipts for tax credit will be issued.)

Memories to be shared at a future memorial service and/or tribute webpage can be sent to gus.yaki.memories@gmail.com.