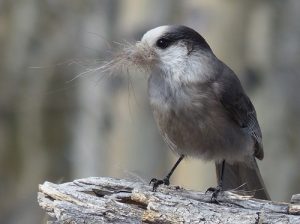 There are movements afoot in Canada to select a National Bird. Currently we have the maple as our official tree and for better or worse, the beaver as our official mammal. So why not an official bird? Many countries have one, the U.S. with its bald eagle being a prime example. And they take a lot of national pride in their bird. We strongly believe that we should choose the Canada Jay or Whiskey Jack. In no order of importance, here are no less than SEVENTEEN compelling reasons as to why it would be a great choice:

1) Found in all thirteen provinces and territories; it is only observed in a limited part of the U.S., e.g. in the Rocky Mountain region of the Pacific Northwest and Alaska

2) A member of the corvid or crow family, arguably the smartest birds on the planet;

3) Not an official bird species for any of the ten provinces and recognized territories nor any other country (Common Loon is Ontario’s bird; Snowy Owl is Quebec’s bird; Black-capped Chickadee is New Brunswick’s bird)

4) Very hardy like all Canadians, having highly adapted itself to living in very cold regions and nesting in temperatures of -30 C;

5) Stays in Canada year-round, i.e. not a “snowbird” like the common loon!

6) Figures strongly in First Nations folklore; the name “whiskyjack” or “whiskey jack” derived from Wisakedjakfrom Algonquin, Cree and/or Innu mythology, apparently meaning “mischievous prankster or trickster” due to their habit of stealing food from packsacks and larders; however, loved for its habit of warning about danger in the forest.

7) The first bird, and perhaps the only bird, to greet thousands of explorers, fur trappers, prospectors, settlers, and First Nations folks, around their campfires in the dead of chilly Canadian winters;

8) Is not an endangered species and thus, not at a serious risk of disappearing;

9) Figures prominently in the boreal forest ecological zone, constituting a vast portion of our country worthy of protection and under pressure from clear-cutting and oil and gas development;

10) Not a hunted species, so not shot by Canadians;

11) Extremely friendly toward humans (like all Canadians), easily coming to the hand for treats, especially in our National Parks from coast to coast;

12) It is called the CanadaJay; Canadians could not have a better name for their national bird!! Its French name has always been “mésangeai du Canada” and its Latin name is Perisoreus canadensis!

13) Not regarded as an obnoxious or nuisance species (like the Canada goose which is culled in the U.S., the UK, and even in Canada itself!)

14) Not likely to be confused with any other bird species

15) Not a circumpolar species, i.e. not found in other northern countries (as is the Snowy Owl)

17) Chosen as the official logo bird of the historic International Ornithological Congress in Ottawa in 1986; it was “the most Canadian bird” they could find!

In short, we cannot think of a more Canadian bird!!! While many Canadians do not see this bird in their backyard every day, many states and provinces as well as other countries have official birds that the public does not see on a regular basis and may in fact never see them as a live wild bird. The fact is that once the Canada Jay is chosen, we can promote the bird so that Canadians make an effort to visit our boreal forests to become very familiar with it and indeed, be proud of it as our National Bird.

Well over a year and a half ago, the Canadian Geographic Society (CGS) initiated a similar online survey, a much more serious effort, for the general public to weigh in on this matter. Forty candidates were nominated, including the Gray Jay/Canada Jay. When the contest ended in late August, the front-runner was the Common Loon with 13,995 votes followed by the Snowy Owl (8948). In solid third place was the Gray Jay with 7918 votes! Who knows how the latter would have fared had it been called the Canada Jay (see below)!! It is noteworthy that both the Common Loon and Snowy Owl are already established as the official birds of the two most highly populated provinces in the country, i.e. Ontario and Quebec, respectively. The former bird has also been honoured on our dollar coin.

While we do believe that the poll run by the CGS was very effective in initiating dialogue about choosing a national bird for our country, we are happy to see this being followed up by some intelligent discussion and debate among Canadian ornithologists about such an important matter as opposed to just having a winner chosen from a popularity contest. For example, Canada’s flag was not chosen by means of a public contest, but by an appointed committee. Nor did we simply adopt one of the provincial flags from our two largest provinces — we chose something “fresh and new” for ALL Canadians! Our Canadian flag with its red-and-white maple leaf design is now something that Canadians look upon with great national pride.

We are seeking help from all quarters to facilitate the selection of the Canada Jay as Canada’s National Bird. Not only is it a fresh, new choice, it is a very prominent bird in our boreal forests and we call upon all Canadians to support this cause and pass around the word! To see how delightful these birds are, take a peek at a recently produced YouTube video athttps://www.youtube.com/watch?v=v_V3VMIxTuU.